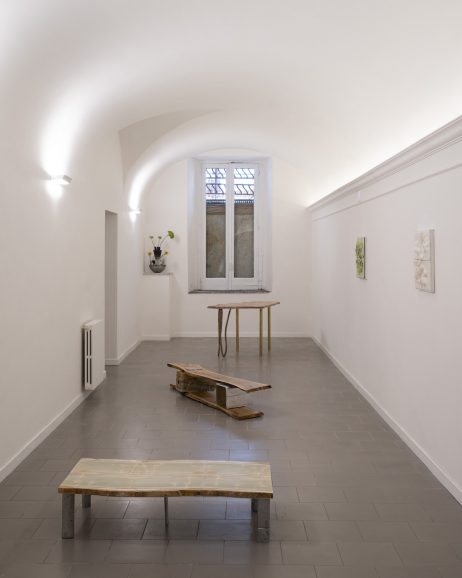 It is with great pleasure that Fonderia Nolana Del Giudice together with LABINAC announce the opening of a space entirely dedicated to LABINAC in Naples, in Via Crispi 69.

To open somewhere that could be used as a shop, with Fonderia Nolana’s partnership with LABINAC, and which would also have a cultural approach and become a meeting place for debate and
open discussion on what it means today to make and deal with design, had long been a project and desire of the collective, and particularly in the mind of the two founders. So when Jimmie Durham left us this past year in November there was never any doubt about the intention to carry on, and indeed to stimulate the implementation of the program.

This exhibition aims primarily to be a tribute to Jimmie Durham himself, as an artist, thinker and friend in research and experimentation within the collective. A Stick in the Forest, the title of the exhibition,
were Durham’s last thoughts before he passed away and it is from these that LABINAC began to design the concept of the exhibition.

Jimmie encourages us to sit down on the ground of the forest and to be in a state of wonder, so that a dialogue can begin with a stick. Perhaps it becomes a leg for a table or an element in a chandelier. Or
you get up and a dog crosses your path and with interest eyes your stick – a gift to be given, and perhaps the beginning of a friendship. The exhibition not only pays homage to Jimmie’s work through
presenting some of his objects, including PINO Tables, Arboletier Chandelier and Baroco-co Salonetto (designed with Alves), but also through the evocation of his culture of origin, his particular irreverence and peculiarity in the use of materials (wood, colors, bones, stones, and other elements) that become ironic and critical at the same time, in a constant game of mirrors between “culture” and “nature”.

This space is inaugurated in the hope that it will become something more than simply a place to admire and acquire, and, above all, be a new meeting point in the city that can broaden the cultural debate around the arts and design.