Wouldn’t it be good if science were more scientific? As has been written many times now by many people, we are well out of the last century and ought therefore to act more twenty-first century.

Especially we should think more of the world as a whole instead of imagining humanity as the center pinnacle.

When it comes to intelligence, however, science still has humans at the ‘top’ of some ladder. We submit that that is not scientific. One hears often that a dog has the intelligence equivalent to that of a five-years old child, or that a cat has intelligence similar to a three-year old child.

Not only to we then treat animals as though they were like children; referring to dogs and horses as ‘boy’ or ‘girl’, but we think that we are the intelligent ones.

An adult horse is much smarter at horsesense than anyone. If a horse were intelligent IN THE WAYS THAT A HUMAN IS INTELLIGENT it would not be good at being a horse. Neither would a human ever pass the tests to measure horseness, obviously.

Humans are not ‘purely’ intelligent. Intelligence as we think of it is tied to primate biology. Our hands, our reliance on visual data, our use of verbal language (as if it were the only language) and all of the abilities which have evolved from these characteristics, are strictly primate. The smarter dolphin would be stupid to think to use them when she has not the physical body of a human. But most especially when communicating with other dolphins.

Human intelligence is just that; not more, not pure. In the last century so much energy was put into discovering which animals could pass which tests to prove they were as smart as us (actually, to prove that they were not as smart as us).

‘What do you think is life — what sorts of things should be considered as living?’, we recently asked the intrepid Elisa Strinna during one of those long evening conversations one has.

‘Whatever is intelligent is alive’, she answered. Then she went on to explain her idea of intelligence. She used the stone called flint as an example of what she means: ‘It has its own integrity, it is complete no matter what. That is a kind of intelligence.’

Isn’t that an exceptional way of looking at, being in, the world? It is so inclusive and generous while being tough. And it shows in Elisa’s use of materials in her art and designs. One might imagine her addressing ‘Brother Sun, Sister Moon’, like St Augustine.

It is an attitude that places humanity within the world instead of above it.

She shows her intelligence by acknowledging the world.

The Alentejo region of southern Portugal produces excellent wine, music, and most of all, stone. Stone workers in other parts of Europe all know that the stone of Portugal is kind of like over-the-top. It seems often even theatrical in its dramatic colours and patterns — fancy in the extreme.

We were in Portugal a month ago looking through stoneyards for slabs of marble that were perhaps not right for the construction trades but perfect for our tables and other strange stuff.

We found beautiful marble with pink, yellow, green and purple striations. Onyx-like sheets one centimeter thick which change light as it passes through. We found discarded scraps which have shapes that seem natural and un-natural at the same time.   And bought as much as we could afford.

We recomend that anyone sitting by our stones in the future listen to Alfredo Marceneiro sing Fado. He was once a cabinetmaker, hence the name

Capua is an ancient city in the south of Italy. It was there long before the Romans, and became an important place in classical roman times. Over the centuries people have used what structures they found and added to them for living spaces. That makes a strange architectural melange with Roman statuary and columns embedded in modern apartment buildings haphazardly.

We went there earlier this year with a friend from Napoli. Visited a depot for salvage from demolished buildings and found old planks of chestnut wood and olive wood six and seven centimeters thick, which had been used hundreds of years ago.

Some of these we have have since made into benches with bronze legs. With the help of Jone Kvie, our resident shelf expert, we made a bookshelf with some and it now works in our showroom in Napoli.

There is in Capua the seldom visited Campano museum with a trove of fertility statues, known as Mater Matuta or Mother of the Morning, made of carved stone.

These pre-Roman statues bring forth the power and strength of women as they bring forth and care for life. 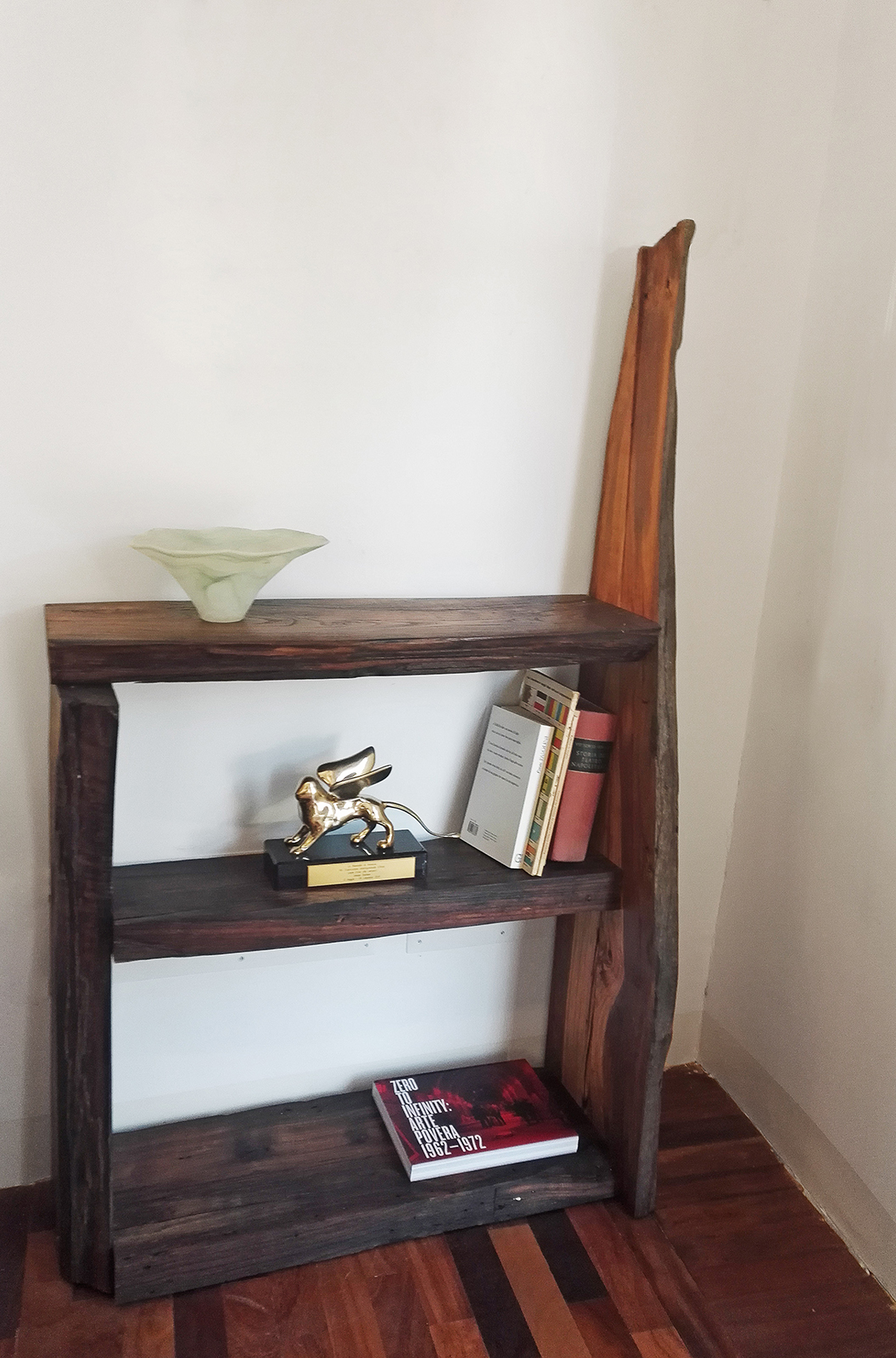 A new friend sent us this image of the Stalactite Bench which Jimmie made early in 2018. She had purchased it this year in Milano during the Design Week. And we are happy to show the image and to see the bench in elegant surroundings.

This bench is the first of an edition. We all think of ita s being connected to music. 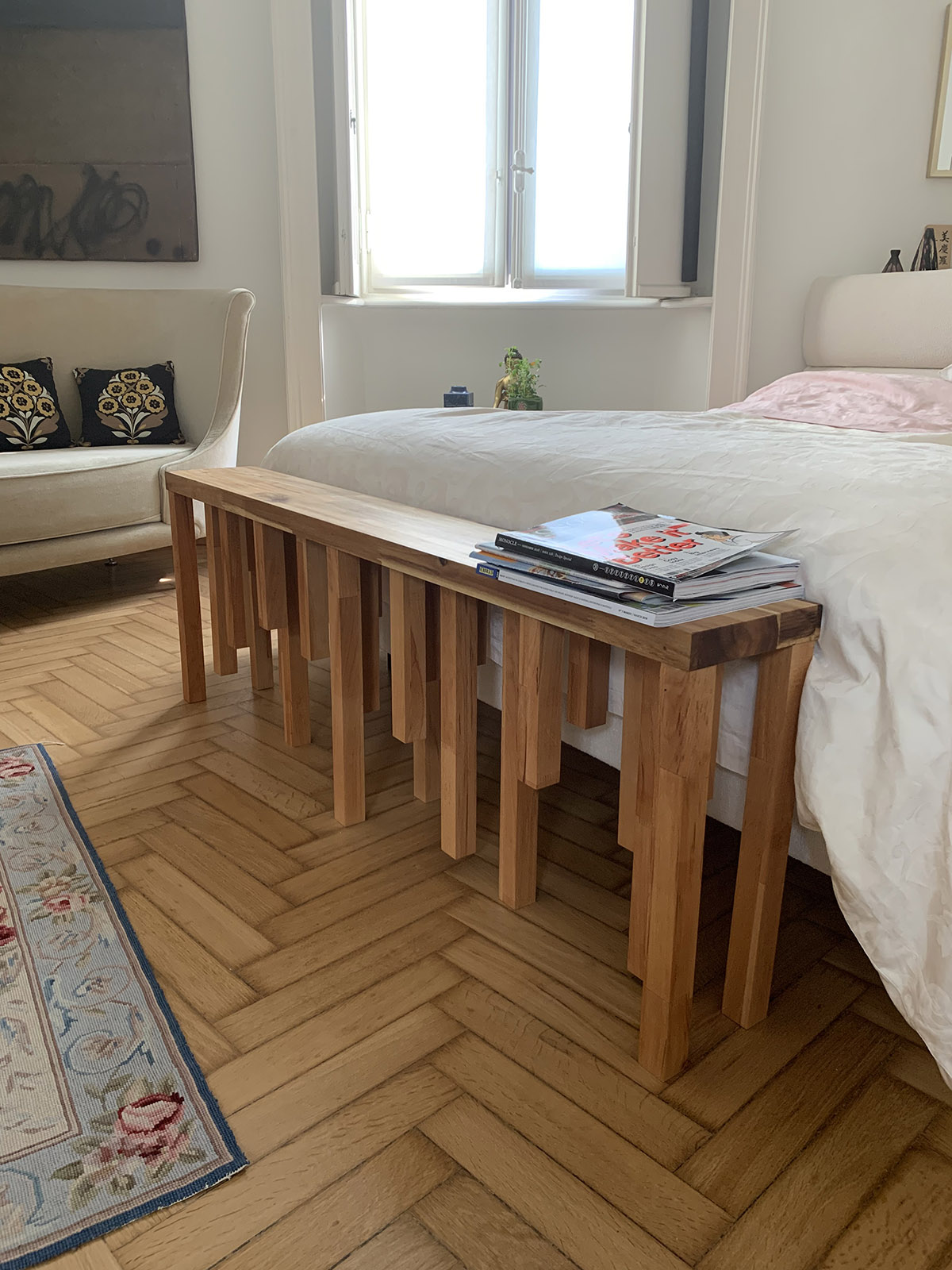 The Glass Artisans of Murano

As sunlight pierces store windows, our breaths still catch at the delight of glass playing with light. The glass artisans of Murano, in Venice, have the kind of skills that come from hundreds of years of constant experience with this magical solid material which however has an obscure arrangement of molecules – for liquid! With the erratic and disordered molecules of glass, the artisans can do anything, it seems.

Working with glass in Berlin I have come to see how strong and how delicate glass can be; how much knowledge is involved in the skills of working with it and how the least bit of fight from the glassblower will turn the glass against her.

In different ways Jimmie and I have always been fascinated by glass. While teaching at IUAV University in Venice some years back we loved visiting the fornaci in Murano and watching the artisans work as they with pride showed techniques which had been developed by their workshop over generations.

Once we lugged three large cartons of broken glass back to where we were staying in Venice, then took them back to Berlin and began making a broken glass chandelier. (It became Jimmie’s main therapeutic exercise after suffering from two debilitating strokes.) 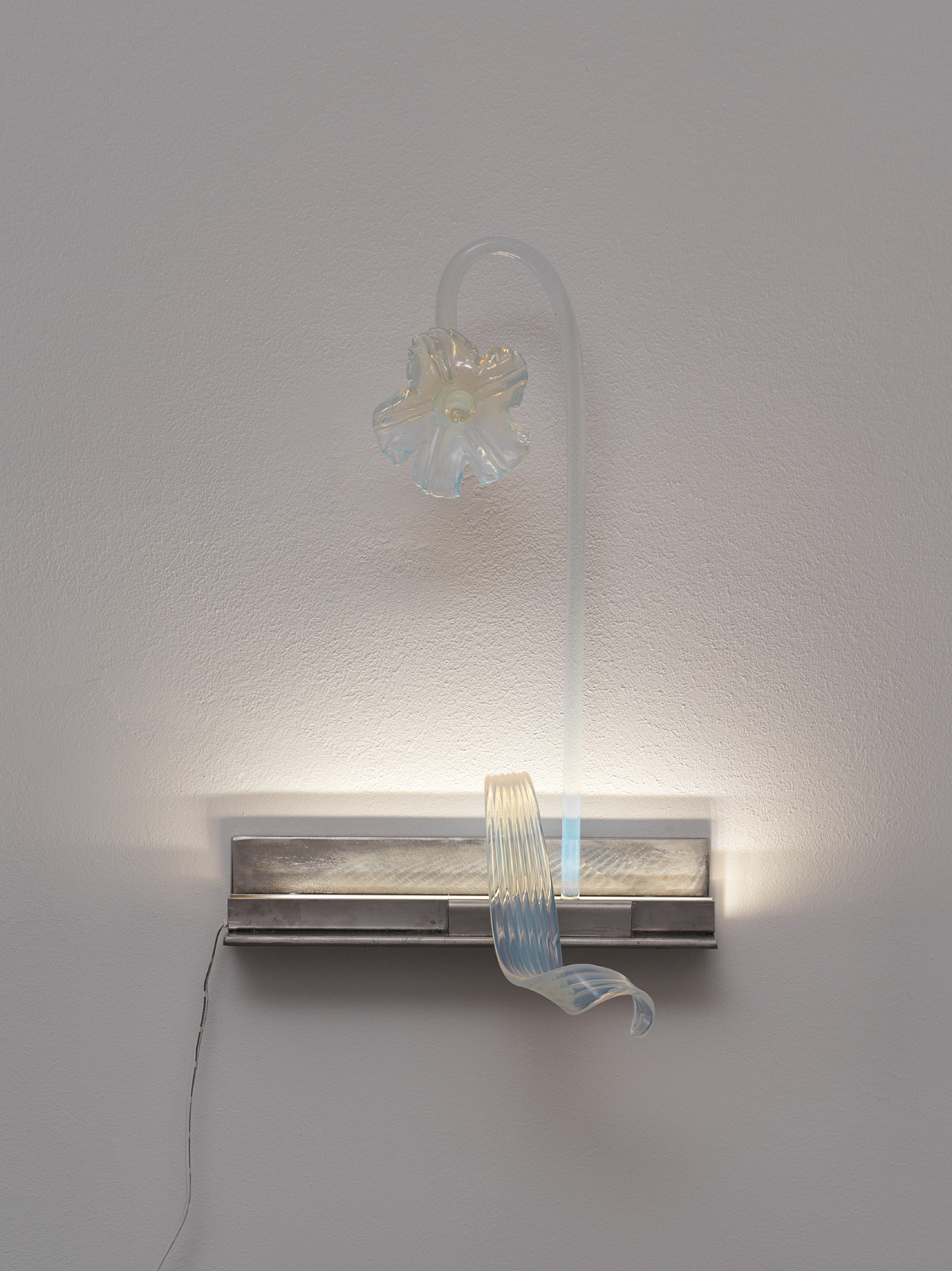 First at the C.I.R.V.A. glass workshop in Marseille and then at the Berlin Glas Studio, we both worked on glass in different ways. He always likes the jagged, dangerous rejecta; I like to see what happens when mixing colours and shapes to make something new while experimenting with maintaining the fluidity of glass sculpturally. Among the first sales of works from LABINAC have been some of the vases I made in Berlin. This is a great encouragement for me and for LABINAC.

With some of the remaining parts we had gathered years ago in Murano Jimmie designed and made a wall lamp using a beautiful old pearlescent glass flower and leaf with industrial angle iron. This specific lamp also serves as inspiration for an upcoming limited edition for a museum in Italy. We showed this piece at the LABINAC grand opening in Berlin in 2018 and then again this year in Milano’s Design Week.

In February of this year we went back to Murano to find glass of the same type. A friend whose family are glass artisans for generations has the kind of love of Murano glass that he collects everything he can from old palazzos, hotels and fornaci. He is the curator-genius of a living museum of spare parts.

Celebrating glass and its relationships with our daily lives, we will continue to design and make lamps, chandeliers and vases for LABINAC.